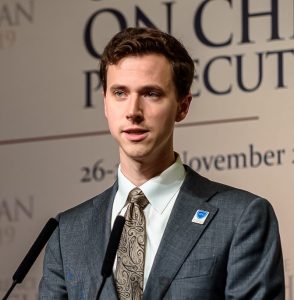 I grew up in Southern Illinois, just outside the city of St. Louis, so Cardinal baseball and amazing barbecue are two of my great passions. I moved to DC in 2017 to work as the Government Relations and Policy Director for a non-profit lobby group that represents persecuted Middle East Christians, called In Defense of Christians. One of the things I love about living in Washington D.C. is having friends from around the world crash on my couch and getting the opportunity to show them my city.

If I had to frame a big goal in one sentence I would say it is to work to preserve a space for Christianity in the Middle East, which faces potential extinction in our life time.

How you hope to impact your community:

I would hope that the impact I have on individuals in the communities I am a part of would be that of someone who is eager to serve those around me in any way I am able out of an abundance of gratefulness and joy that comes from a resorted relationship with my creator.

Best piece of advice you have received:

“If possible, say nothing. If you must speak, don’t go into detail and don’t complain and do not brag.”